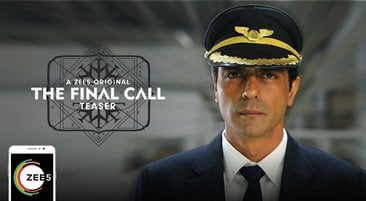 Enjoy Online Web Series The Final Call on ZEE5 Entertainment. After a long time Arjun Rampal on TV screen with this Web series.

The Final Call is an Indian thriller web series based on the popular novel ‘I Will Go With You – The Flight of a Lifetime’ by Priya Kumar. The plot revolves around a flight from Mumbai to Sydney where the captain commits suicide on board. Therefore, the lives of the passengers are at stakes. It is a complete combination of mystery, suspense, and thrill. The director of the web series is Vijay Lalwani, and it is streaming on Zee5 from 22nd February. Arjun Rampal is in the lead role and the supporting cast as Neeraj Kabi, Javed Jeffery, Sakshi Tanwar, Pradeep Rawat and many such popular faces.

The first half of the story revolves around Arjun Rampal as Karan Sachdeva. He is a former air force officer who turned into a pilot of Skyline flight 502. His past experiences trouble him, and they haunt him to such an extent that he takes fatal drugs to relieve himself. But it reaches the height of intolerance when he was the captain of a flight with nearly 300 passengers. He finally decides to take its life and leave the fate of the passengers in extreme uncertainty.

The characters of several prominent passengers are portrayed very well. Neeraj Kabi is a deadly astrologer, and Javed Jeffery is a business tycoon with peace or happiness. They are many such interesting characters who ended up in the flight by fate. The airline officer Kiran Mirza along with the ATS team comes to action to save the passenger. Even though it looks quite a clichéd storyline, the presentation and cinematography are out of the world. There are so many twists and turns, and the diversity is constant throughout to hold on to the suspense factor perfectly.

Reception of The Final Call:

London was the destination for some of the parts of the web series, and the rest of them were in Kashmir. Arjun Rampal had to take classes of flight simulation to make his role perfect.

No one is unaware of the risk of flying on a plane. But can you ever imagine that the plane you are in, it could be your last flight ever? You entrust your life on the pilot who will make you reach your destination safely. But what happens when his personal life problems force him to commit suicide on board? What will be the fate of the plane and the passengers? You must watch this nail-biting web series for the ultimate thrill.