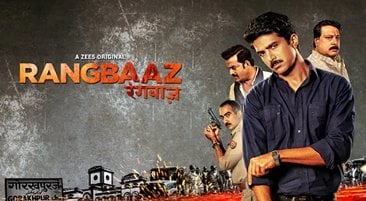 Rangbaaz is a crime thriller web series by ZEE5 Original. This is an original web series that is set in the 1990s against the rural background of Gorakhpur, Uttar Pradesh. It is based on a true story on Shri Prakash Shukla. Rangbaaz stars Saqib Saleem as Shiv Prakash Shukla who is a dreaded gangster around whom the web series is based on. It is a gangster drama, and it is likely to compete with Sacred Games and Mirzapur both of which are very popular and successful gangster drama web series.

Shiv Prakash Shukla is a young boy from Gorakhpur who goes on to become the deadliest gangster of UP in the 1990s. He is in organized crimes and works for some powerful politicians. Soon, he becomes the most notorious and most wanted criminal of the state. The state government sets out a Special Task Force lead by Siddhartha Pandey. And that was the first time STF formed in India for him.

The web series shows how a DDU student goes on to become one of the top three most wanted criminals in India. Apart from the dark and dirty world of crime featuring murder, greed, and vengeance, it also shows the human side of the dreaded gangster. Most of the characters on the web series are inspired by real-life characters. Shiv Prakash Shukla is Shri Prakash Shukla, Ram Shankar Tiwari is Hari Shankar Tiwari, Babita Sharma is Shree Prakash’s girlfriend and Chandra Bhan Singh is Surajbhan Singh in real life.

Rangbaaz is streaming on the ZEE5 digital platform since 22nd December 2018. It is available across more than 190 countries. The web series is getting a thunderous response from the viewers. The performance of the lead character Saqib Saleem is impressing everyone beyond their expectations. The web series is buzzing on social media platforms. If you like watching gangster dramas like Sacred Games and Mirzapur, you will surely love it. It is available in Hindi, Marathi, Bengali, Tamil, Malayalam, and Telegu.