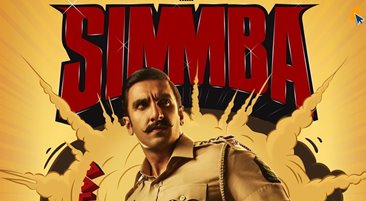 Ranveer Singh acted movie Simmba is going to blockbuster on this New year and Christmas. Apply Simmba movie coupons and promocodes for extra cashback and discount.

Here, we present the full list of the Simmba Movie ticket booking offers. Find the Simmba movie offers for extra discount and cashback on tickets. We are updating this page regularly with Cashback and offers.

This is the upcoming Bollywood action movie directed by Rohit Shetty. It is a spin-off movie from the Singham franchise, and it is produced by Karan Johar under Dharma Productions. The movie is releasing on 28th December 2018 and distributed by Reliance Entertainment. The stars Ranveer Singh as the lead male role and new actress Sara Ali Khan as the lead female role. There is also a cameo from Ajay Devgn in his popular role of Bajirao Singham.

How To Book the Simmba Film Tickets Online:

Movie revolves around the life of ACP Sangram ‘Simmba’ Bhalerao played by Ranveer Singh. He was an orphan and then turned an antiheroic cop. Simmba belongs from Shivgadh which is the same town from where Bajirao Singham belongs. But there are striking differences of Simmba from Singham. Unlike Singham’s integrity, Simmba initially started as a corrupt cop taking bribes and enjoying the perks of an immoral police officer.

But the twist in the plot and the turn in his character arrived when Simmba’s loved ones are abused by various means by the people from whom he used to take bribes.The Life-changing event forced him to choose a righteous path in his profession, and after his epic transformation, Simmba walked on the path of revenge.

Simmba is releasing on 28th December 2018 which is the biggest weekend of the year. Movie is expected to do a business of more than 150 Crores.

Since the movie gets the ideal release during the festive time with Christmas and New Year holidays, you should book your tickets as soon as you can at your nearest cinema hall. There are amazing offers and discounts on BookMyShow and Paytm movies.

Regarding this movie you can check here

This Movie is somewhat inspired by the Telugu movie Temper(2015) for some scenes. The locations where the movie was shot are Goa, Kolhapurm, Hyderabad and at Mehboob Studios in Mumbai. One of the super-hit songs of the movie “Simmba Aala Re Aala Simmba Aala” was shot at Ramoji Film City in Hyderabad. The lead actors Ranveer Singh and Sara Ali Khan flew to Switzerland to film a song sequence for a different song in the movie.

Only the final sequence was shot after Ranveer’s wedding and the filming wrapped in early December. Therefore, the movie is releasing with a record-time of less than one month from the end of production works.

The director Rohit Shetty used a double for Ranveer Singh to shot a Dhaba fight scene in Goa as the wedding date of Ranveer Singh and Deepika Padukone fell in between the shooting dates. Due to Ranveer’s after-wedding commitments, Rohit Shetty went ahead with a double so that the movie lets the biggest release during the Christmas week which unofficial belongs to Rohit Shetty’s movies.