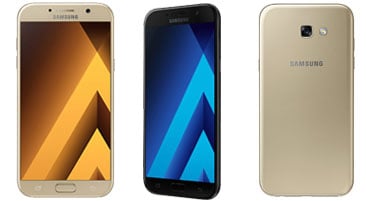 The Samsung Galaxy A7 2017 is now on online sale in the TataCliq store exclusively. You can own it at Rs 33490. It features Super AMOLED screen, IP68 Water and Dust Resistant, 4G VoLTE, Fast Charging and much more. Currently, it is available in Gold and Black color options. So, hurry up.

Samsung has added more spice to mid-flagship smartphones market in India with the new Galaxy A 2017 series. The Galaxy A7 2017 coming in Black and Gold options. You can get it at Rs 33490 exclusively only on the TataCliq store. It comes with FHD Super AMOLED Display, an octa-core processor, 16MP rear and front cameras, Fingerprint scanner, FastCharging and more features. So, at this Rs 30000 around price range, the Samsung Galaxy A7 2017 and A5 2017 is competing with the OnePlus 3T mobile. 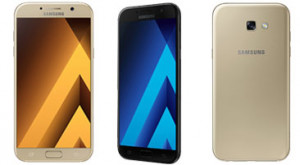 The Galaxy A7 2017 features 5.7-inches Super AMOLED HD screen. And, it has 1920 x 1080 pixels of resolution and 3D Curved Glass. IP68 Water and Dust Resistant is there. So, the mobile will be safe from the standard water drops, and dust can’t enter the device. It comes with v6.0 Marshmallow version of the Android OS. There is the maximum chance of getting the Android Nougat update.

An Exynos 7880 octa-core processor with 1.9 GHz speed powers the A7 smartphone. 3GB of RAM is present there. So, the mobile will have a no lag performance while multitasking or high-end gaming. It’s 32GB of phone storage has the expansion capacity of up to 256GB via microSD card. 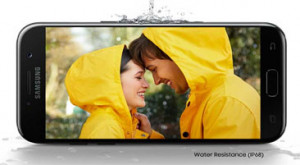 It has got the 16MP rear camera with Autofocus, LED flash, f/1.9 aperture lens, and more excellent features. So, the 16MP front shooter has got the screen flash for a splendid selfie performance. The Fingerprint sensor is there with the home button for unlocking the A7 2017 with just a finger touch. Its 3600mAh battery has a superior battery backup. The Fast Charging technology from Samsung helps in faster charging.