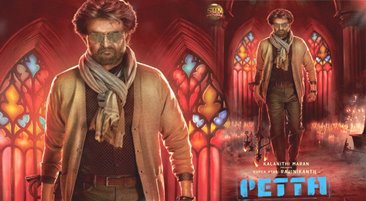 Petta is a recently released action cum suspense Tamil movie, and it is dubbed in Telegu and Hindi. The movie has been produced by Kalanithi Maran and directed by Karthik Subbaraj who is also the scriptwriter. The movie is out under Sun Pictures production studio. The biggest draw Petta is the starring of Superstar Rajinikanth. Petta hit the box office on 10th January 2019. It is ruling not only in South India but also doing good business in the rest of India. The cast includes popular names like Vijay Sethypathi, Trisha, Simran, and Nawazuddin Siddiqui. Check Here more Movie offers here.

Kaali, the protagonist of the movie, is an elderly person. He takes up the job of a hostel warden in a boys’ college in Darjeeling. He soon discovers that the hostel is dominated by a few rowdy final year students and Michael. He is the son of a local politician, is the leader of the group. Kaali manages to prevent Michael’s oppressive antics, and in the process, an enmity grows between the two.

Kaali becomes friend with an NRI hostelite named Anwar. Anwar is in love with Anu, the daughter of Mangalam who is against the relationship due to religious difference. In the process of convincing Mangalam(played by Simran) to accept Anu and Anwar’s relationship, Kaali and Mangalam fall in love. On the other hand, Kaali’s enemy Michael lusts for Anu. Michael tries to harass the couple, but Kaali suspends the interaction of Michael and his friends in the hostel. Anwar recorded this humiliation of Michael and shared the video all around to make it viral.

A local goon in Uttar Pradesh named Jithu sees the video. Jithu’s father Singaar has past animosity with Kaali, and hence, he sends his men to kill both Kaali and Anwar. Things take an interesting turn when Kaali’s comes face to face with the gangsters as his past surfaces, and his real name is revealed as “Petta” Velan. From this point onwards, the movie goes through a series of twists and turns in Kaali alias Petta’s conquest in settling his past animosity with Singaar. The ending of the movie is something nobody could anticipate.

It is a true suspense movie with extreme actions and swags as you expect in a Rajinikanth movie. You should not miss the movie at any cost and book your ticket today.

The main locations for the movie were Darjeeling, Nepal and North India. The filming started on 7th June 2018, and the initial phase took place at Eastern Forest Rangers College at Kurseong in Darjeeling. Quite surprising, the trailer released on 28th December less than two weeks before the movie release. The producer wanted the movie to hit the screens during the Pongal festival. The movie is out in Tamil, Telegu, and Hindi.

So far, the worldwide collection of the movie has crossed 125 crores out of which 62 crores are from Tamil Nadu box office. In South India, it is dominating against Ajith’s Viswasam and competition against URI in North India. Go book your tickets today on BookMyShow or Paytm as it is one of the best action-suspense movies of all time. More information about this Movie