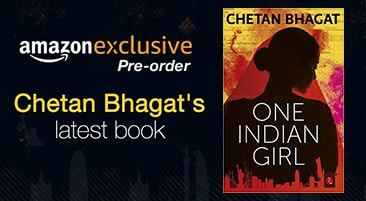 Chetan Bhagat, one of the top authors in India has launched his all-new book, the One Indian Girl. The One Indian Girl Book is the latest book by Chetan Bhagat. The pre-ordering of this book is now exclusively open on Amazon India store. So, pre-order now to get the book from 1st October 2016.

Chetan Bhagat is the author of most of the bestselling novels in India. His creations like Five Point Someone, One Night @ the Call Center, The 3 Mistakes of My Life, 2 States and others has been massive hits among readers. His books are not only popular in India but also famous worldwide. He is the leading author in India of this decade. His latest one is One Indian Girl Book.

All his books have been bestsellers. From the release of his books, they stay the best-selling books. Even four of his books have inspired and transformed into Bollywood movies like 3 Idiots, 2 States, Kai Po Che and others. The films which made from his books has also been hits. That’s why he is the top author in our country. 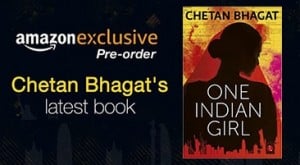 About One Indian Girl book:

He is now back with his new book named One Indian Girl. The One Indian Girl Book is all about an Indian girl apparently (hahaha). The girl is intelligent and fruitful too. Because of that, she finds it tough to get love. Chetan Bhagat said he had wanted to write a book as a female person from years. Not only that, but he also wanted that book should be about women and deal with the feminism. As a male writer, it was a huge challenge for him. He didn’t have any confidence to do that. But later after writing over a decade, he finally wrote the “One Indian Girl.”

But finally, he has done it. The book is now available for pre-ordering. Yes, the One Indian Girl Book by Chetan Bhagat is now exclusively on Amazon India store. You can now pre-order it as the pre-ordering started from 19th August. You will get the book starting from 1st October 2016 as the book will be releasing that day.

It is priced at Rs 119 only. The price doesn’t matter in the case of Chetan Bhagat books. So, do pre-order this book now and ready to read and feel the unique story of the book. Hurry up.

Steps to Buy One Indian Girl from Amazon