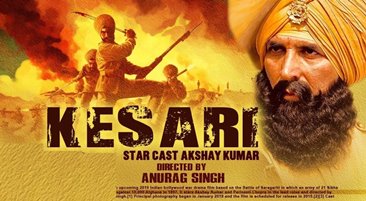 Here is the full list of the Kesari Movie ticket booking offers. Find the Kesari movie offers for extra discount and cashback on tickets. We are updating this page regularly with Cashback and offers.

Kesari is an upcoming Bollywood biopic movie which portrays the character of HavildarIshar Singh. It is a war film which shows how 21 Sikhs fought bravely against ten thousand Afghans in the Battle of Saragarhi in 1897. The movie stars Akshay Kumar in the lead role, and Parineeti Chopra is the lead actress. The director of the movie is Anurag Singh, and the producer is Karan Johar. The movie is releasing on 21st March 2019, and the trailer is already out and has received major traction. Check all movie offers from BookMyShow movie offers page.

How To Book the Kesari Film Tickets Online:

Kesari is a war movie based on the true event of one of the bravest battles even fought in India. It portrays the Battle of Saragarhi of 1897 that took place when the British Empire wanted to infiltrate Afghanistan. The story revolves around Fort Saragarhi which was located in North Western Frontier Province. It was a communication post to transfer messages between two military posts namely Lockhardt and Gulistan.

The Sikh regiment of the British Indian Army was posted in Saragarhi, and the name of the movie Kesari is derived from the turban color which is Saffron. The color symbolizes pride and valor of the Sikhs. The Sikh regiment in Saragarhi consisted of 20 indiscipline and rough Sikh soldiers. On the other side, Ishar Singh was a brave Sikh warrior and lived by his own rules. Therefore, there were multiple occasions when his actions conflicted with the orders of the British officers he was under.

As a punishment, Ishar was posted in Saragarhi among the unruly 20 Sikhs. On 12th September 1897, he along with 20 rogue Sikh soldiers, he fought the memorable Battle of Saragarhi against 10,000 Afghans.

The movie’s production started in January 2018 and end on 31st December 2018. It has three songs namely “SanuKehndi”, “Deh Shiva” and “DukaalangPranasi”. The film has a lot of similarities with Zack Snyder’s 300. Apart from the plot, the action sequences are quite similar but the script is original, and the similarities are just coincidence. Check more information here