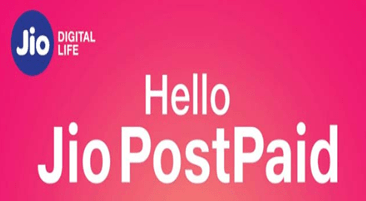 Reliance Jio’s new postpaid plan has taken everyone by shock. After making up a storm in the prepaid segment, which is still on the soar, Reliance Jio has taken the war to the postpaid segment as well. The new plan is priced at Rs 199 but offers benefits worth much more if you compare it to other service providers like Airtel, Vodafone, Idea. Finally, Reliance Jio has been launched Reliance Jio Postpaid in India market. Reliance Jio has introduced a “zero-touch” plan for its Jio Postpaid plans, where all postpaid services such as voice, internet plans (data), SMS and international calling will be pre-activated and no extra charges applicable for it. This Reliance Jio company has also announced the price of international calling starting from 50 paise to 6 rupees on.

Comparison of Jio Vs Airtel Vs Vodafone:

Here is the comparison of Jio, Airtel and Vodafone details 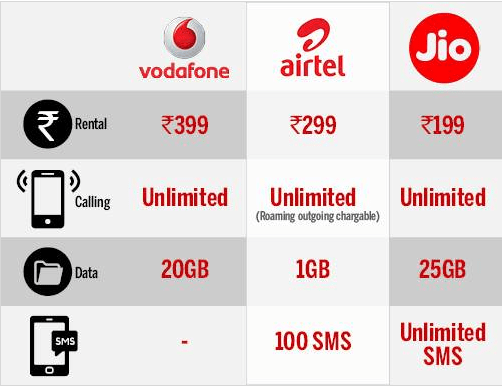 After making a storm in prepaid section Reliance Jio had decided to keep a step in the market as Reliance Jio Postpaid. And the company launched postpaid service in all over India on the date 15 May 2018. Obviously, it will soar in the market. The postpaid plans of Jio is more cheaper than the big competitor Airtel, Vodafone and Idea. Where the Jio gives 25GB data, unlimited SMS and unlimited calls at Rs.199 there Vodafone gives 20GB data, 0 SMS, unlimited calls at Rs.399, Airtel gives unlimited calls, 100 SMS, and 1GB 4G data. If the user uses the ISD services without any active plan, charges under Jio Postpaid will start from Rs 2 per minute for voice calls, Rs 2 for every MB of data and Rs 2 for every SMS. To check more plans check jiopostpaid